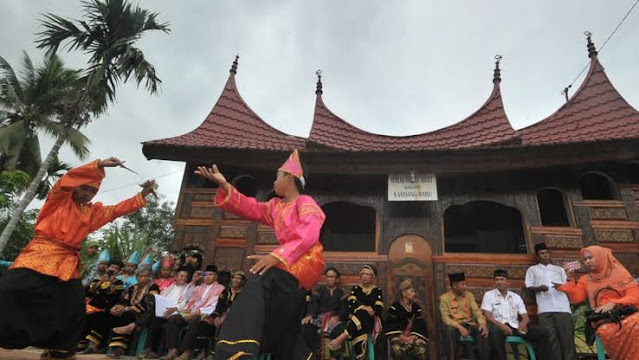 We have almost entered the end of Ramadan. Then, the holiday will come back again. To welcome the holiday, one habit that should be done as much as possible by the nomads, namely; going home (going home) is being worked on. Usually about a week before Lebaran, hundreds of thousands of people will flock to their hometowns. Big cities will be quiet for residents to live in, to visit the yard, go home to enjoy the holidays in their respective villages. No wonder in times of severe traffic jams will occur everywhere.

Not connected with the Minangkabau people who are wandering, they will try to also return home. It doesn't feel good if you don't go home for the holidays. For that, they are willing to spend a lot of resources. Heat, rainy nights on the road, pickpockets and sometimes accidents are not a barrier for them.

There is one thing that is unique and interesting that we can observe this year. It seems that Minang speakers have often heard two songs that are currently viral on the Tik Tok application, namely; Rayo in Rantau and Taragak Home. Check out the lyric excerpts from the following two more

How far is it that Rasonyo is on his way home / Now the youngest is tibo's satisfaction / The heart is getting taller / Father's son jo Amak in the overseas bamandi aia mato.

After all, the overseas batahun has become a living port / tabayang the village looks bamain maso in the past / misses the batahun who spends much of the day and night making it easy for me / mandayo to return home to the village, nan denai cinto.

These two numbers contain lyrics that have the same meaning; the ballad of a perfect nomad celebrating his holiday in his hometown, what sets it apart is the plot at the end, where Rayo in Rantau mourns himself for his holiday in the sea, while Taragak Pulang is an invitation to return home and hope to be with a potential partner.

maybe people have used this song to upload them on social media —especially Tik Tok. In general, this is used as a soundtrack to accompany videos of trips —which are usually land, to their hometowns. Leaving Jakarta, entering the Merak port, crossing the Sunda Strait, crossing North Sumatra and Jambi, entering the province of West Sumatra by choosing the welcome monument at Dharmasraya and arriving at their respective destinations. Imagining the natural beauty of the hometown that has been abandoned for a long time during the trip is a sensation that is difficult to explain.

The waving lyrics calling to return home with a number of uploads that have become FYP on Tik Tok have become a calling magnet for immigrants to return home. Since ancient times, Minang pop songs have become a means of remembering one's hometown. Through these songs, the nomads remember the Minangkabau land they had left behind. This seduction is a factor that causes many of the lyrics to mention the names of areas in Minangkabau.

To explain this, Barendregt (2002) writes that, the Minangkabau realm has always been a conceptualization rather than a geographical reality, and the changing media helped to shape a virtual realm.

Through Tik Tok, the song that was actually recorded a few years ago is back in popularity and always appears in the FYP of the user's Tik Tok account.

Currently, perhaps a number of people from almost all ethnic groups have migrated. However, the identity of the Minang people as nomads is still widely known throughout the country. Merantau is a typical term in Minangkabau culture. wandering means leaving the term village or leaving the homeland (Kato, 2005).

Meanwhile, the history of Gusti Asnan (2003) offers two understandings that are understood by the Minangkabau people regarding this term; first leaving his hometown for various purposes and motivated by various factors; the second is a change of thought or transformation of thought from one condition to another. The number of immigrants is also very large. Traditionally, the youths seek their luck in the opposite land. This is what according to Barendregt (2002) makes the phenomenon of wandering into a popular theme in Minang folklore.

This is also passed down to the second or third generation, to keep building bonds with Minang nature. Nature represents an emotional bond to the landscape and society shares moral values ​​as “urang crew”, which is often expressed in songs and poetry.

For Minang speakers it is not just a language —it is one of the most important media for expressing Minang culture, and music is the most suitable means for that. In addition, Minang music is very useful, especially to describe emotions that are difficult to describe with only words. This includes expressing about distant relationships that are framed in the natural beauty of their hometown. So, it is not surprising that many Minang songs include elements of nature or the name of a region in the song, which is combined with the pantun tradition which is a common thing for people in Sumatra and the Malay world.

Basically, the philosophy of art in Minang is an environment in which they are rooted to make nature their teacher. This philosophy connected with every creative act is the product of experience (pareso) on the one hand and emotion/intuition (raso) on the other. Music should focus on the mood.

Furthermore, Barendregt explained that; “According to the main artistic goal of Minang pop is to evoke emotion, worry and parasai, sadness and melancholy. In addition, Minang pop for most of its fans consists of moral lessons and most of the songs are written in somewhat esoteric language (figurative language).”

Minang songs became more popular among the nomads as a medium to express them to their hometown. Although it ends up giving off a melancholy impression, this type of music seems to always live on for Minang nomads wherever they are.

Minang people don't just listen to Pop Minang in their hometown. Suryadi, in his Ph.D dissertation (2014), wrote that Minang pop is also sung by non-Minangkabau singers outside West Sumatra, and several ethnic groups in Eastern Indonesia like this type of music and try to imitate it in their own pop music.

The lyrics of the song refer to emotional attachment to certain areas and express a sense of longing. The landscapes evoked in this way, together with old memories, embodied by images of village life and other nostalgic images together form the meta-Alam Minangkabau.